Rectopexy is a repair of a prolapsing rectum that involves mobilising the rectum, and suspending it, usually with mesh, to the bony prominence (sacral promontory) of the pelvis. Abdominal surgery for rectal prolapse is increasing being performed key hole (laparoscopic or robotically) with benefits of small incisions and less pain than traditional open surgery.

Ventral Mesh Rectopexy is a procedure involving the suspension and fixation of the front of the rectum and pelvic floor to the bony sacral promontory with a bio-dissolvable mesh. In this technique, the nerves to the rectum that enter from the back and side are preserved with mobilisation only from the front of the rectum. The preservation of these nerves is thought to improve rectal function and emptying, and reduce the risk of hind gut neuropathy and resultant constipation. Preservation of these nerves also prevents disorders of sexual function and fertility. There is no evidence that recurrence rates are higher with bio-dissolvable mesh compared with permanent mesh. The bio-dissolvable mesh also avoids the long-term complications of mesh infection and erosion reported with permanent mesh.

Robotic ventral mesh rectopexy with the da Vinci® platform is gaining increasing popularity and beginning to replace laparoscopic surgery due to the increased ease with which suturing is able to be performed using the robot within the narrow confines of the bony pelvis. This is largely due to the ability of the articulating miniature robotic arms to perform complex fine-motor movements within a confined space. The extra third arm also allows for excellent retraction within the narrow pelvis, and the three dimensional magnified view allows for visualization and preservation of the pre-sacral nerves preventing hind gut, sexual and fertility dysfunction. 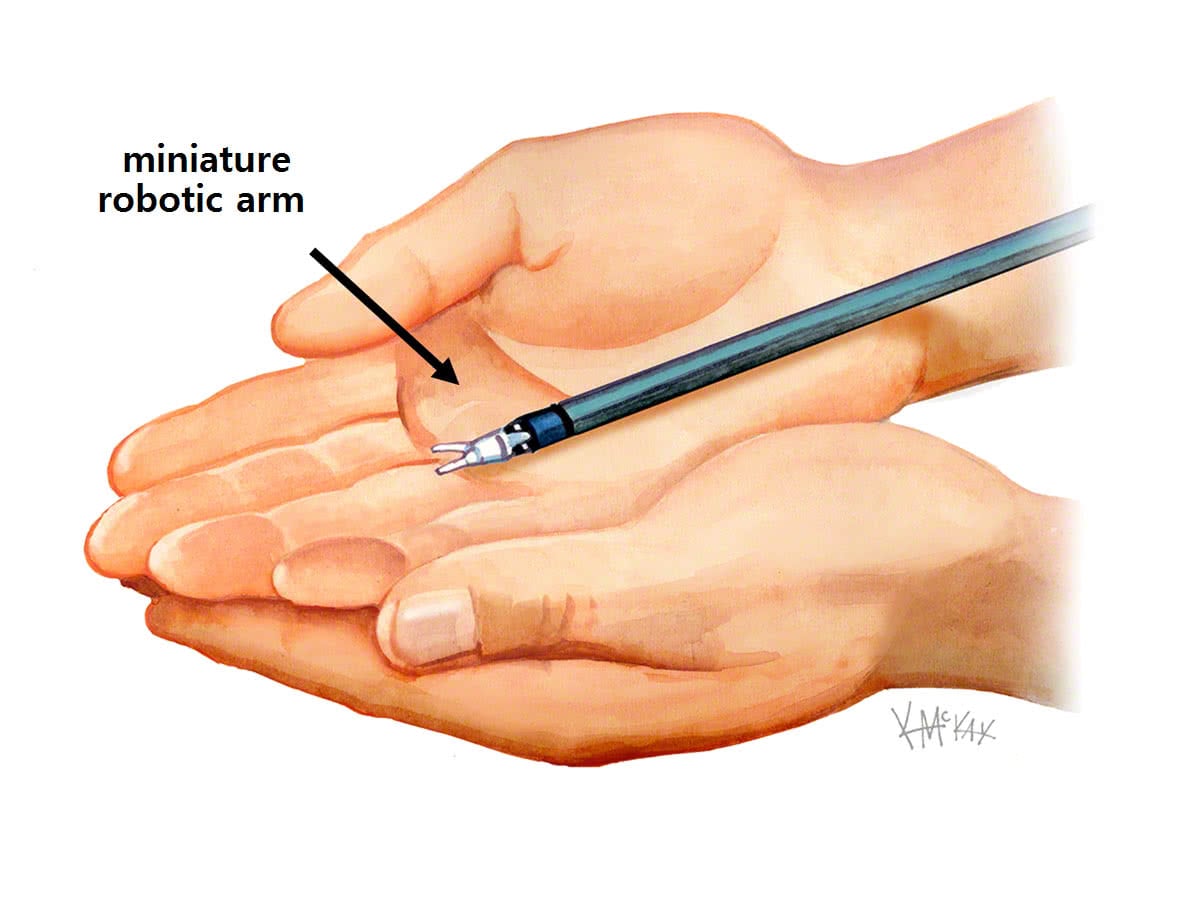 The latest Xi da Vinci® robot, has narrow instruments and a camera less than 8mm in width, allowing all ports to be less than 8mm in size. This has the advantage of smaller cuts and less pain and early discharge and return to normal activities. The ability of the camera to fit through any of the 8mm ports (a features not present with earlier da Vinci® models) also allows for greater freedom and interchange of instruments when required, making multi-quadrant surgery much easier. 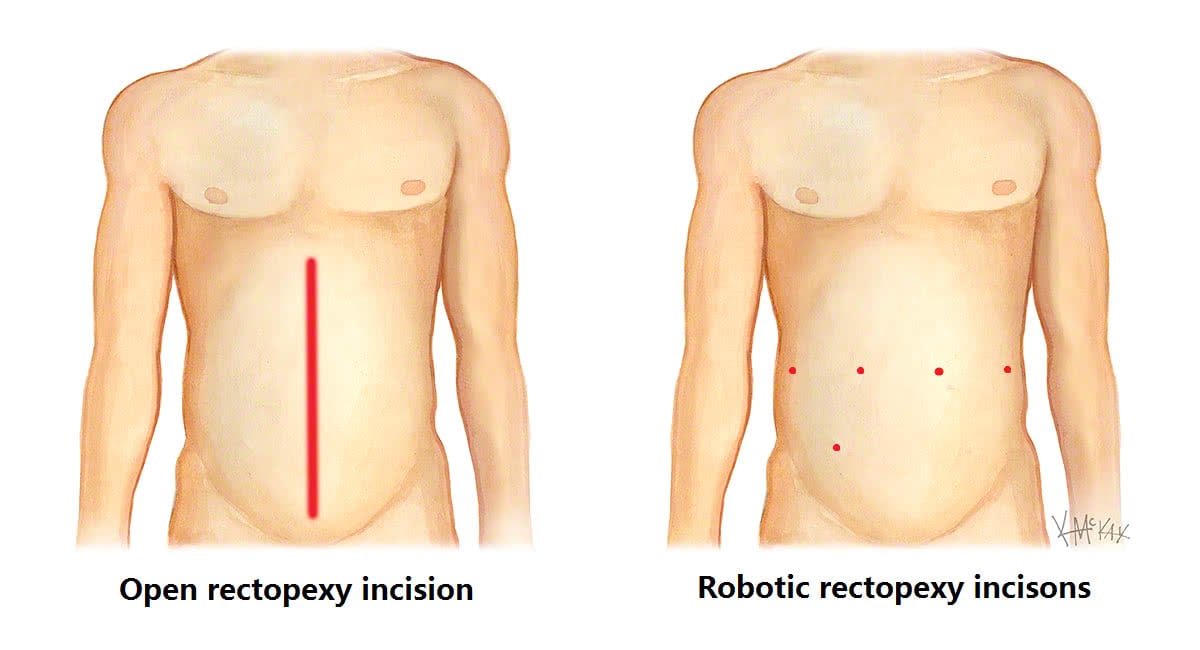 The 8mm incisions with the xi da Vinci® model are usually five in number as shown above, with one for the camera, three for robotic instruments, and one for the surgical assistant to assist with the passing of sutures, equipment as required.

Complications after ventral rectopexy are uncommon. The risk of constipation is reduced by this procedure which involves only anterior (i.e. ventral) dissection and avoids posterior rectal mobilisation, and therefore avoids damage to the posterior autonomic nerve supply to the rectum. Recurrence rates are less than 5%[1], being much lower than perineal procedures where recurrence rates are as high as 20-30%[1]. Mesh erosion into the vaginal has been reported, and this risk is significantly reduced by using a dissolvable mesh such as Surgigis®, which is an 8 ply mesh that is made from porcine submucosal collagen[1]. There is no evidence that using a dissolvable mesh increases recurrence rates [2]. Dissolvable sutures such as PDS also reduce the risk of long-term infection, but do increase the risk slightly of recurrence. Intervertebral disk infection has been described as a rare complication occurring in 0.3% of cases from fixation of the mesh to the bony sacral promontory with 2 cases reported in a review of over 728 cases [2]

What to expect prior to surgery for rectal prolapse

You will need to have only clear fluids the day before your surgery. Clear liquids are those that one can see through. When a clear liquid is in a container such as a bowl or glass, the container is visible through the substance. Examples of clear fluids include water, broth, apple juice, jelly, sports drinks such as Gatorade®, Lucozade® and Gastrolyte®. Try to drink at least 3-4 litres the day prior to your surgery.

You will also require bowel prep to clean your colon. Take a Pico-sulfate (Picolax®) sachet (mixed in a glass of water) at 2pm, 4pm and 6pm the day before your procedure. If you are prone to constipation, the 4pm Picolax is replaced with a sachet of Glycoprep (mixed to a litre with water). You can purchase these from your chemist without needing a prescription.

The exact time for your admission is finalised the day prior and you will receive a phone call in the morning at about 10am to inform you what time to present. This is normally 2 hours prior to the planned start time.

What to expect after surgery for rectal prolapse

You will be given a Patient Controlled Analgesia (PCA) device to administer your own pain relief for the first 24 hours, then this will be replaced with oral pain killers (usually paracetamol, and a nonsteroidal such as Celcoxib® or Nurofen®, and if needed oral oxycodone (oxycontin®).

You will be on regular laxatives (Movicol®) from day 1, and should remain on this for 6 weeks. The dosage is individualised, with huge variation between patients. The usual starting dose is one Movicol® twice daily. This can be halved or doubled or quadrupled depending on the response. The aim is soft stool to avoid straining.

Walking is encouraged from day one, as this improves your recovery and prevents against developing a venous clot and pneumonia. Gentle swimming or cross-trainer or cycling can occur after 48 hours. No vigorous running, jumping or exercises are recommended for 6 weeks after surgery.

Water proof Comfeel® dressings will cover each of your 8mm incisions, and can be removed 7 days after surgery and simply left open.

You will be discharged from hospital once you have opened your bowels and are tolerating a normal diet. This can range from 3 days to a week.

If not already done so, you are to go back on all your regular medications on discharge.

Please ring 1300 265 666 to organise a follow-up appointment with your surgeon at 2-6 weeks after your procedure.